BUP’s statement regarding the war in Ukraine

BUP’s statement regarding the war in Ukraine 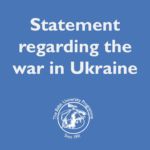 This is to inform all BUP colleagues about the current situation for the Baltic University Programme (BUP) as an organisation in light of the war in Ukraine. The BUP strongly condemns Russia’s invasion of Ukraine and offers our wholeheartedly support to those colleagues and students most affected by the war.

The directives we now have received are the following:

For thirty years the BUP has developed peaceful cooperation where all countries in the water catchment area of the Baltic Sea are included. The mission of BUP, to promote and support academic co-operations, can hardly be more topical, in the work for sustainable development in the Baltic Sea Region. Our aim is as always to support the key role that universities play in democratic, peaceful and sustainable development.

It is devastating and tragic that such a development that we now see occurs since major efforts have been made after the end of the Cold War to develop peace, communication, understanding and co-operations in the region. The Baltic University Programme has been a part of these efforts – and still will be.

It is a tremendous tragedy that peace within the Baltic Sea Region has not prevailed.

The BUP Associate Secretariat at the Hamburg University of Applied Sciences, Germany, has started an initiative titled “Baltic Science Bridge”. The idea is to provide support to Ukrainian scholars and scientists unable to work in the country due to the war, with an opportunity to live and perform some academic work in a Baltic Sea country which is not part of the conflict. All BUP member universities are invited to join and offer this extremely vital support.